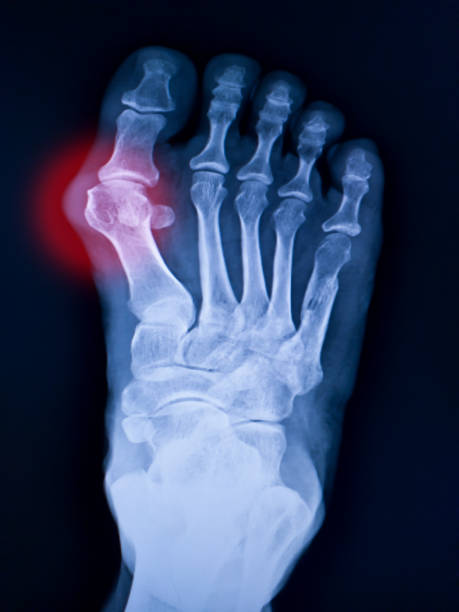 Originally discussed in December 2018, we rewrote about this topic with a few changes in particular, with more information on how high fructose corn syrup can have a large impact and the biological processes involved.

Gout is an inflammatory arthritic disease in which the metabolic condition of hyperuricemia leads to the deposition of monosodium urate monohydrate crystals in the joints, tendons, bursa but also in the kidneys.  Most commonly, gout will affect the big toe first, but can also be present in the ankles, other toes, knees, wrists and hands.  An acute flare up typically lasts 5-7 days and eventually settles down.  But a second flare up often comes on soon after.  To provide more information on this joint disease, we will look more closely at the symptoms, diagnosis, treatment and prevention methods. 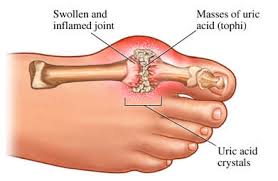 Most commonly, the very first symptoms of Gout include sharp, stabbing pain in the big toe, often with redness and inflammation.  The reason the big toe is the first to be affected, as some have suggested, is because the big toe is often the coldest area in the body (as it is furthest from the heart) allowing the uric acid, which is sensitive to temperature, to form crystals.  The peak pain intensity occurs within the first 24 hours and often will take 5 days to 3 weeks to completely resolve, even without treatment.  However, a second episode will soon follow.  Blood work typically shows elevated uric acid levels.  Without treatment, the attacks may continue to occur in single joints or multiple joints and involve the formation of “tophi”, which are larger subcutaneous deposits of uric acid crystals.  Tophaceous gout is characterized by chronic pain, joint stiffness, joint damage and erosive arthropathies occurring most often in the toes, ankles, knees, fingers, wrists, elbows, and less commonly in the ears as shown in the picture below. 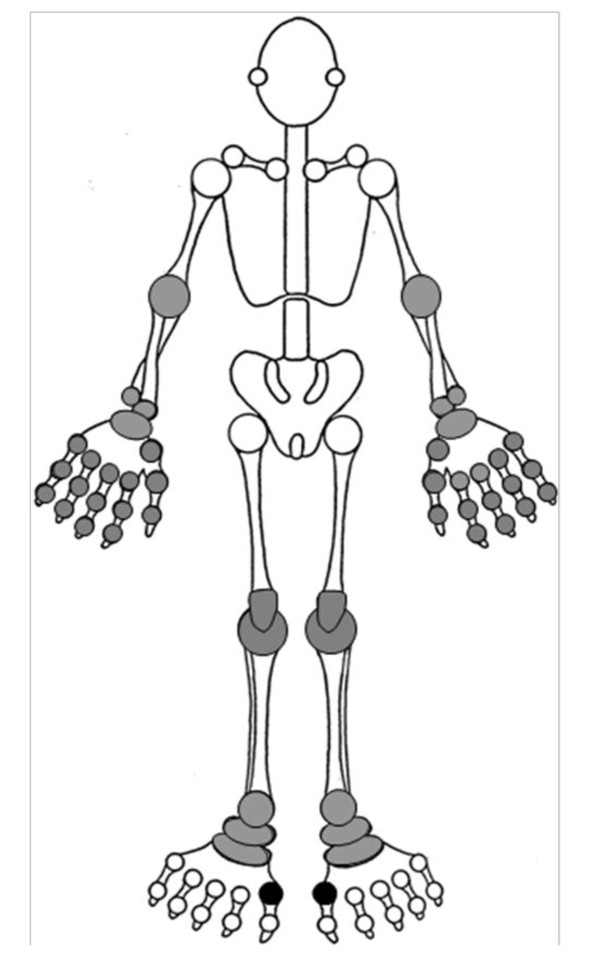 The definitive diagnosis of Gout comes from the microscopic analysis of the synovial fluid (fluid from the affected joint) for the presence of uric acid crystals.  But this is not usually done as a first method of diagnosis as it is a bit more invasive.  The diagnosis of gout may come strictly from the history of presentation and the symptoms of acute arthritis of the big toe.  Initially, the patient may not have elevated uric acid in blood tests and xrays of initial presentation often show little to no changes in the joint.  And elevated blood uric acid doesn’t always mean the presence of Gout.  Independent laboratory references should always be considered, however, in general, blood levels of uric acid over 420µmol/L in men and 360µmol/L in women would be considered as hyperuricemic.

Gout can be diagnosed on x-ray, but typically only after there is extensive bone damage.

The first line of treatment for acute Gout are non-steriodal anti-inflammatory drugs (NSAIDs) to help with the pain and reduce the inflammation. However, the ultimate goal is to treat the hyperuricemia.  Uric acid is produced from the breakdown of purines.  Purines are nitrogen containing nucleotide bases that are highly used by our cells, particularly in the production of DNA and RNA.  Purines are found in high levels in meat and seafood as well as in some dairy products, vegetables and grains.  There is a genetic component to Gout that may cause an inclination towards producing more uric acid than normal.  If your parents had Gout, there is a good chance that you may carry a gene that increases your risk of also developing Gout.  Hyperuricemia is treated very well with medications like Allopurinol and Colchicine, which can help prevent the onset of acute Gout flares.  Typically, uric acid lowering drugs are not administered until at least 2 episodes of acute Gout have occured.  There are other options to the above mentioned medications if they are not tolerated well.

In addition to the breakdown of purines, uric acid can be produced from the breakdown of fructose (the biochemistry pathway is quite extensive, but here is a very interesting podcast which discusses this in extensive detail CLICK HERE).  Treatment then is to avoid foods that increase the production of uric acid including the high purine containing foods as mentioned above and foods with high levels of fructose, or even worse, foods with high fructose corn syrup.  Let’s discuss fructose a little more in depth.

Fructose is a sugar that is found naturally in fruit.  Sucrose, or table sugar, contains one molecule of glucose combined with one molecule of fructose.  Glucose is metabolized in the body to produce energy.  Fructose is also metabolized in the body but requires a lot of energy to do so.  Eventually, if we eat a high amount of fructose, our energy will drop dramatically, so much so that it stimulates a starvation mode causing further hunger, thirst and the need to store energy as fat.  Animals that hibernate are stimulated to go into a fat storage mode as temperatures drop and eat a high amount of berries and other fruits to increase fat storage which will be used for energy while they hibernate over the winter.   When we eat sucrose, or even fructose in fruit, it needs to be broken down first in the intestines before it will be absorbed and delivered to the liver for further metabolism.  This will take a bit of time and is not at a high concentration.  However, high fructose corn syrup, which in liquid form is highly concentrated fructose, will be absorbed very quickly and delivered to the liver in high concentration.  This will lead to a higher amount of fat storage in the body and/or the liver, a condition known as nonalcoholic fatty liver disease (NAFLD), which is becoming increasingly prevalent around the world.

Even while on medication, avoiding high purine foods and fructose can make a big difference in uric acid levels.  So one should avoid foods and drinks like liver, beef kidney, brain, sardines, anchovies, herring, mackerel, scallops, beer, yeast extract, nutritional yeast.  Other foods with moderate amounts of purines include asparagus, lentils, cauliflower, any drink with sucrose or high fructose corn syrup, any baked goods with high sugar or use of high fructose corn syrup.

Diagnosing Gout in a chiropractic office is fairly common.  Treatment on the other hand, is less so.  Often, due to the extreme pain of the patient, they will hardly let you near the area, let alone try to adjust the joint.  Due to the erosive nature of Gout, adjusting or manipulating the joint would be contraindicated.  However, once the pain settles down, and there is no evidence of erosive joint destruction, some gentle joint mobilization or manipulation may be beneficial to the joint health.  Likely, the most effective treatment a chiropractor can provide would be nutrition and dietary recommendations.

If you have any further questions on Gout or your health in general, please contact us directly at drmarnie@mmdchiropractic.ca, Book Online, or call 905-529-2911.